The issue of devolving powers more locally is a recurring theme in recent political debate and particularly the de-centralisation of income tax — the single biggest source of public revenue. This raises the question:

How can taxes be set and collected locally to fund council expenditure when income, wealth and needs vary so much between councils?

I'm going to explore the issues around this question by looking at two neighbouring councils East and West Dunbartonshire. It's reminiscent of the East Lothian question in that both raise problems associated with different levels of government. And, of course, the issues of tax and representation cannot be separated, and are hardly trivial, such was the cry of "no taxation without representation" in the run up to the American Revolution.

Numerical details and references to sources I've used in what follows are in this spreadsheet, available in ods or xlsx format. Bewarned though, those spreadsheets are quite involved: untangling finances from multiple levels of government isn't easy.

First, let's look at council tax raised by each council. 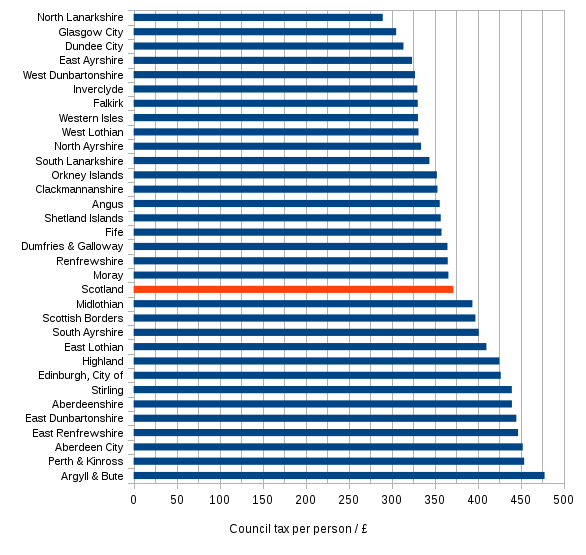 As you might expect, poorer areas collect less council tax than richer areas. West Dunbartonshire has the 5th lowest council tax take per person, and its eastern, posher neighbour has the 5th highest.

Next, let's look at the non-domestic rates (NDR) that are collected from each council. You can think of NDR as being a tax on businesses with premises in a council area. 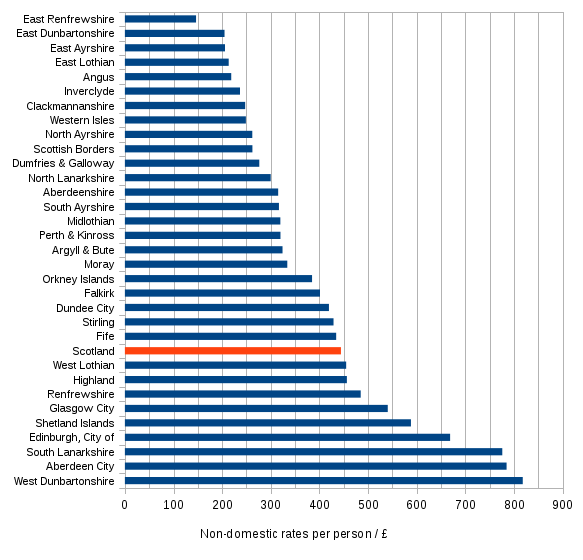 And here's a surprise. The situation is reversed. Now West Dunbartonshire is ranked first — it collects more NDR per person than any other council. East Dunbartonshire comes out second lowest, ahead of its rival comfy Glasgow suburb, East Renfrewshire.

The plausible explanation is of course that rich, residential areas tend to have little heavy industry or large places of employment. Property values are high precisely because they are leafy, green and quiet suburbs. West Dunbartonshire on the other hand offers lower land costs and so is a more attractive area for large businesses to occupy.

Our third graph shows gross expenditure per person, and breaks it down into the major revenue sources that fund it. 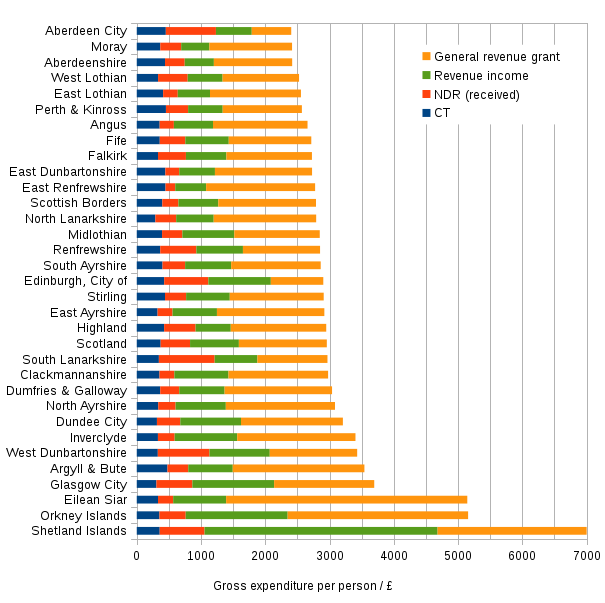 I think it's reasonable to suppose that the councils with the highest expenditures per person are spending more because of need rather than inefficiency or profligacy. The graph contains some supportive evidence of this: the highest spending councils are those with islands, followed by urban areas that have high poverty rates, such as Glasgow and Dundee.

Before returning to the Dunbartonshires, the sources of revenue other than council tax need some further explanation:

With all this in mind we can break down the funding for the Dunbartonshires a little further: 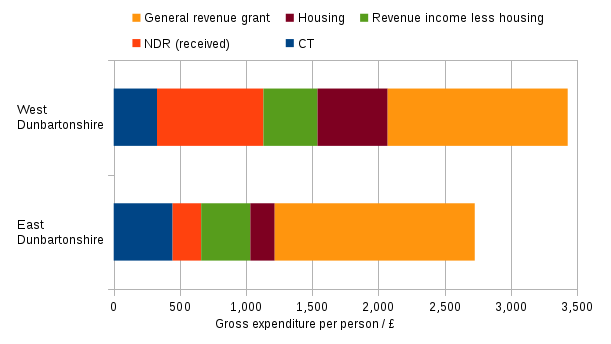 This shows us two things. Firstly, West Dunbartonshire gets almost three times more funding for housing benefit than East Dunbartonshire. Secondly, the blue plus red plus green bits are raised locally, whereas the dark-red plus orange bits are funded by central government. (Actually, some central government funding is probably still mixed in with the green bit, but it's a small amount and fiddly to separate out.)

And this leads us to this table showing an estimate of the breakdown between local and central funding.

Even with West Dunbartonshire's extra ability to raise revenue locally from businesses, it still needs more central funding to meet its expenditure per person. And this leads to the question:

If funded by a local income tax, how can West Dunbartonshire raise more money from its residents who have lower incomes than its richer neighbour to the East?

The question gets even tougher to answer if we were to consider a council that isn't fortunate enough to have a high income from NDR, such as West Dunbartonshire's other neighbour Inverclyde.

The obvious solution is to collect taxes locally, send them into a central government and redistribute them back to the councils based on need, much like is done with NDR, and indeed implicitly with income tax already via block grants.

And admitting that this is the solution is also an admission that centralisation is necessary, at least to some degree, to ensure funding gets to where it is needed. It makes more sense to me to avoid the needless complexities of a local income tax, and the increased potential for tax competition between councils, by keeping income tax centralised.

A similar point could be made about devolving tax to countries and regions within the UK, but some care is needed because that differs in many important details. That said, the machinations around the Scotland Bill and the ensuing framework highlights the extreme fiscal yoga positions politicians have to adopt when compromising de-centralisation with "no detriment".

So, am I saying that de-centralisation is impossible? No, though I think it is impossible to do it fairly within the confines of our current system. If the true natures of fiat money, credit and public borrowing were understood more widely then new possibilities will emerge, but that's for another blog post.

Patient: Doctor, doctor... it hurts when I do this!
Doctor: Well, don't do that.