This is a just a quick follow up to my last post to tighten up a few details on the estimates I made. The numbers and graphs presented in this post supersede the ones in the last one for a few reasons which I'll detail below. But, in short, the estimate of non-wind renewables has been refined and this has resulted in less wind power being required by 2023 to meet the Scottish Government's renewable target.

The graph below replaces the one in the last post. 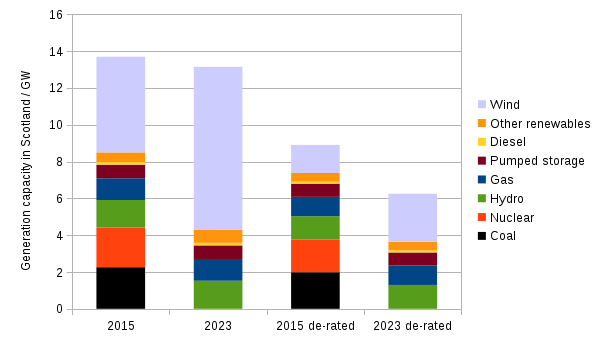 The 2015 column is little changed, except that non-wind renewables have increased by 0.6 GW, and wind reduced by a similar amount. Whereas the 2023 column was noticeably larger than the 2015 one in the last post, it is now slightly smaller having been reduced by 3 GW (as explained below).

The two de-rated columns weren't included in the last post — they show the average generation we can expect in reality. The 2023 de-rated column is much smaller than the 2015 one because of the loss of coal and nuclear, but also because de-rating significantly reduces wind capacity. As such the 2023 total de-rated capacity is much less than the 2015 value.

The next graph is new and illustrates what was described only in words in the last post. A factor of 0.85 (representing transmission losses and generators' own use) is applied to all the de-rated values in the above graph. This allows us to compare available supply with the average and peak demand values — 3.7 GW and 5.5 GW respectively. 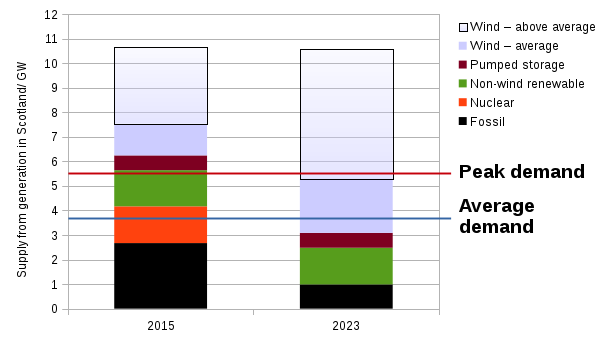 This graph makes it clear that average and peak demand can always be comfortably met in 2015 with room to spare for exports. However, in 2023, a peak demand at average or low wind levels would require imports. In fact, even average demand might not be met on very low wind days. Exporting in 2023 would only be possible when the wind was above average.

So although some of the figures have changed quite substantially, notably the required wind capacity, the conclusion and bottom line figures remain much the same.

Note: As explained in the last post, if Scottish supply fails to meet Scottish demand that will not cause a "lights out" situation as long as demand is met across the entire GB grid.

The method and so figures have changed for the following reasons:

The end result of all this is that about 3 GW less wind power is needed in 2023. The most part of this comes from including more non-wind renewables because at a capacity factor of around 90%, as compared to 30% for wind, 0.6 GW of non-wind capacity equates to about 1.8 GW of wind capacity.

The full workings behind all of the above are in this spreadsheet: ods or xls formats. Please do get in touch if you find any mistakes in it.

There are a few factors worth considering not accounted for in the above: