I was leafing through Scotland's National Accounts, as you do, when I noticed that some aspects of the much awaited 2014-15 GERS (General Expenditure and Revenue Scotland) report, which is due for release later this week, are in fact already released, albeit tucked away at the end of a spreadsheet.

First up, the graph below shows the total revenue figures for 2014-15. The figures are nominal, i.e. not adjusted for inflation, as they will be published in GERS.

Next, we can look at GDP which again is in nominal terms, and split into onshore and North Sea parts. 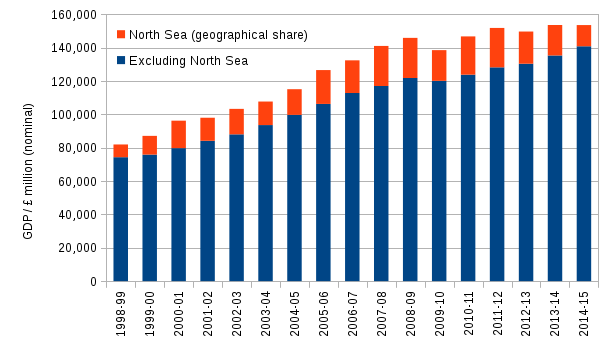 There has been onshore growth in nominal GDP since last year, but if we include the North Sea, Scotland's economy shrank by £700 million between financial years 2013-14 and 2014-15. The definition of a recession is if an economy shrinks for two consecutive quarters, and looking at quarterly, real terms GDP figures in the national accounts, Scotland's recession started in 2013Q4 with only 2014Q4 and 2015Q2 showing growth since then.

According to European ESA10 standards for national accounts, Scotland's official GDP is onshore-only and so technically we're not in recession. That said, with real onshore growth at only 0.1% in 2015Q2 and 2015Q3, we were teetering on the brink of one in 2015. We won't know 2016 figures for a while yet.

Finally, here are the figures in the first graph divided by those in the second, i.e. Scotland's revenue expressed as a percentage of GDP. 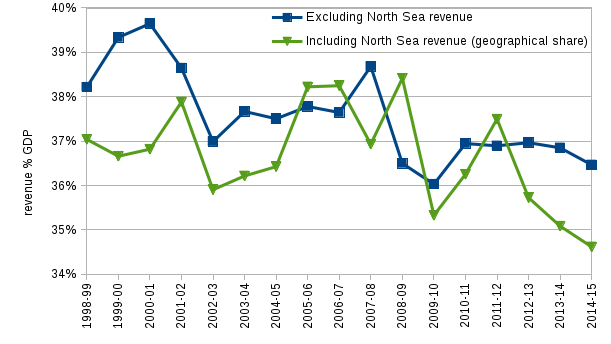 The reason the percentage of GDP including the North Sea is so much lower than the onshore one is that revenue from the North Sea is based on a tax on profits which have fallen much more dramatically than has North Sea GDP. In fact, profits are close to nil at present.

The national accounts do not contain enough information for me to estimate the expenditure figures that will be released in GERS this week, but they'll be much higher than the revenues of £53 billion. My guess-estimate is they'll be £67-69 billion, about £15 billion higher than Scotland's revenues.

A comparison with the UK gives this some perspective. Chancellor George Osborne plans to cut public spending from 40.6% of GDP in 2014-15 to 36.3% in 2020-21. He hopes that this will give him a balanced budget by then, i.e. revenues will equal or perhaps even slightly exceed expenditure. This means UK revenues will be around 36% of GDP too. For historical context, the UK's public spending has remained above 35% since World War 2.

So, in terms of revenue as a percentage of GDP, Scotland has already gone beyond what Osborne plans for the UK after another five years of austerity. If Scotland were independent, which it would've been in 2016 had the Yes vote carried, then we'd face a tough choice in how we'd sustain our high public expenditure against lower revenues.

One option would be to cut public spending and endure austerity much more savage than the Tories plan for the UK. Another would be to raise taxes by a large amount, probably by more than the economy could sustain. The other option — possibly the least bad — would be to seek massive borrowing on top of whatever agreed debt Scotland would take from the UK at separation. Whatever fiscal levers could be pulled to improve growth in years ahead, an independent Scotland would've started from a very difficult place.

As things stand, Scotland remains in the UK and we do not have to contemplate such horrible choices. The UK's onshore growth has been reasonable to 2015Q3 and the damaging effect of plummeting North Sea revenues is heavily diluted at the UK level (ball-park 1% of revenues for the UK, rather than 10% for Scotland).

Of course, my figures are not official and it's possible I've made a mistake in the detail. I'd be most grateful if anyone did let me know if they find any errors, especially if they lead to a more optimistic statement of Scotland's economy. The national accounts spreadsheets with my workings can be downloaded in ods or xlsx format.

As a postscript, I'm delighted to see whisky export duties are up one million percent on 2013-14, but then they always have been a nice round number.