I shared some thoughts on why I voted remain, then mused on the result and the possibility that brexit might not happen, but now I'd like to try and understand why people in the UK voted to leave in such large numbers.

There are a variety of simple stories: In large swathes of the poorest parts of England and Wales it was a vote against the establishment from people that feel neglected and unrepresented. It's a reflection of rising inequality in society. It expresses a desire to "take back control" from the EU. It was driven by fear of immigration laced with racism.

Naturally there's some truth to all of these, but how much truth and what evidence is there?

It's well worth looking at the work of John Harris as he talked to people around the country. Yes, it's vox pops and anecdotal, but John's approach reveals attitudes that don't come out so clearly in more traditional reporting, and that cannot be captured in the aggregate numbers of most opinion polls.

There are two prominent quotes in that article:

said by a woman in Collyhurst, near Manchester. Also, the strap line of that article is:

brexit is about more than the EU: it’s about class, inequality, and voters feeling excluded from politics.

Now here's the problem. From John's interviews it's quite clear that these sentiments are strong, but can we assume that what people say made them vote leave is the real reason, or the whole reason? I'm not accusing them of lying, nor am I patronising. I ask the same question of myself all the time: why have I come to that conclusion? Have I found an after-the-fact rationalisation of it that I like to tell others, and myself, or is there some deeper reason? Is it consistent with other things I (like to) believe? Is it what my peers think? Is it some influence from my parents?

I'm sure psychologists would tell you that this is not a straightforward issue. Thankfully, they've found a way to tackle it: don't ask people direct questions on a single issue but probe more widely around their attitudes and values.

Exhibit A — income and inequality

This Resolution Foundation blog post looks at the change in income and how it is correlated with the leave vote for local authorities in Great Britain. 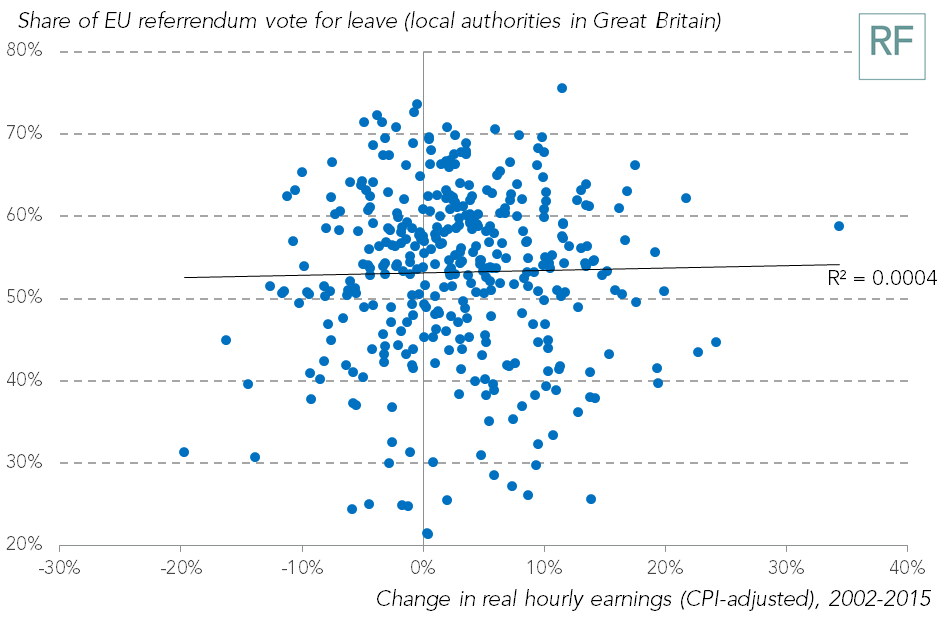 It seems pretty clear that there is no correlation. That is, it provides no evidence for the proposition that changes in income inequality might be driving people to vote leave.

In fact, if you look at the first graph in their blog post you will see that although average weekly earnings have dropped from £490 to £470 since 2008, there's been a significant rise from a value of £430 in 2001. These are all in real terms, i.e. corrected for inflation. Nevertheless, the short-term and palpable perception is people feel poorer just now.

So if the change in incomes isn't correlated with the leave vote, might people's level of income be correlated? This graph from the same blog post plots the leave vote against hourly earnings in 2015. 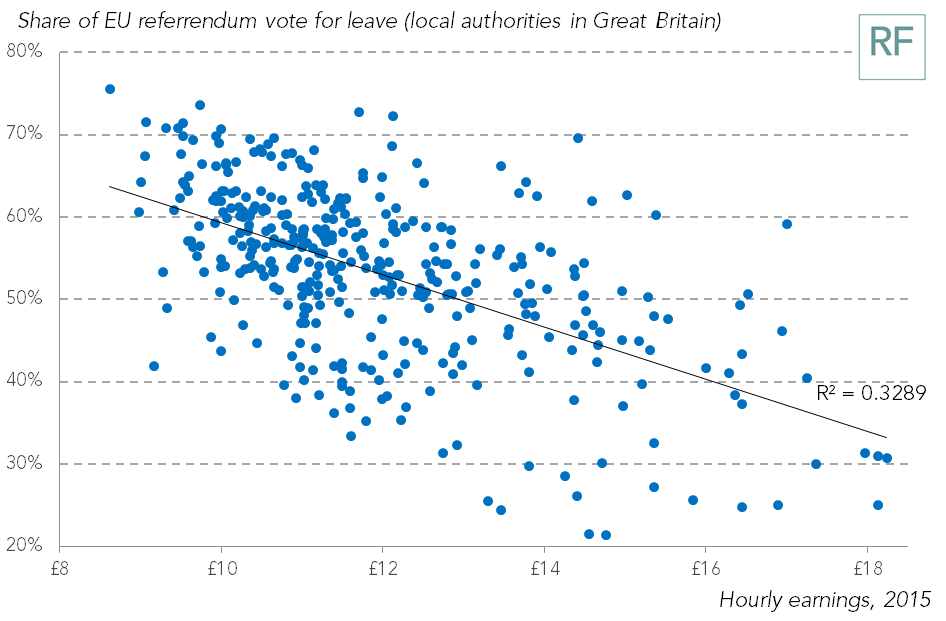 An article on the Fabian Society website presents some analysis of data from the British Election Survey of 24,000 people in 2015-16. The graph below plots the probability of a leave vote against how strongly the respondent agreed with the death penalty for serious crimes. 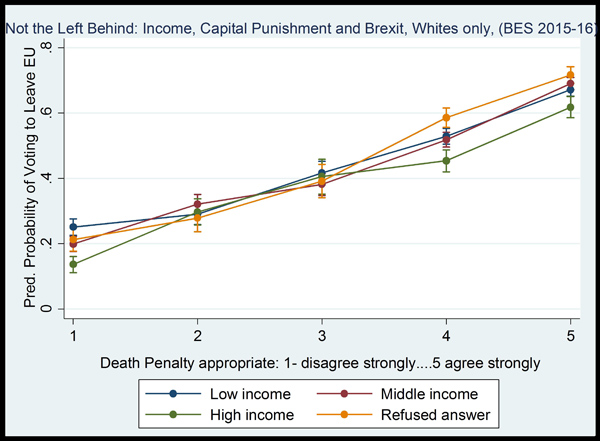 This also shows a weak correlation between income and voting leave, but shows a strong correlation with support for the death penalty. Just in case that's so surprising that it's unclear: the more strongly people support the death penalty, the more likely it is that they will vote to leave the EU.

The association that interests psychologists here would be the the underlying values of the people involved. Support for the death penalty is suggestive of strong authoritarian values, that is a desire for an ordered society and severe punishments for those who break the order. This result is backed up by a second correlation between likelihood to vote leave and support for public whipping of sex offenders.

It surprised me at first that such questions were asked in the British Election Survey, but clearly psychologists and psephologists know enough about us humans to realise that asking an individual an explicit question about their motivations and values can yield distorted answers.

I have a few questions about the data presented in the above graph and would recommend not reading too much into it at present. For one thing, it certainly needs to be placed into a broader context with other questions from the survey. Nevertheless, it suggests that we need to consider ethical values and look beyond the commonly discussed left vs right of politics and national identity.

I've lived most of my life in Scotland, so I'm keen to know if the above patterns are also present here. I have 35MB of British Electoral Survey data sitting on my laptop awaiting analysis, but I suspect it will show much the same correlations.

What I can say for now is that more careful probing in surveys about attitudes to Europe has shown that Scots are not much more europhile than others in the UK and that the current high levels of political support for the SNP and independence can explain much of the higher remain vote in Scotland.

If the societal issues that underly the brexit vote in England and Wales are present in Scotland too, then, although they may be suppressed at present by Scotland's distinct politics, they might emerge if Scotland becomes independent.

If we want to address the problems underlying electoral shocks, of which brexit is the biggest to date, then we need to understand why they happened. Explanations involving the poor and disenfranchised rising up against the establishment, or, to put it more simply, class war, may be valid, but are one dimensional. Searching in multiple dimensions is hard, but by looking at various correlations we can whittle down the number of possible causes that merit attention. But to go from correlations to causes we must think beyond the numbers.

The remain campaign placed heavy weight on the views of economists, and as important as economics is, I think their social scientist colleagues are due some more attention. Not just the psychologists, who I mentioned to above, but we need philosophers too. Ian Jack's article on the brexit vote goes deeper than its title suggests — "the poor turned on an elite who ignored them" — it points the reader to an interview with Harvard professor Michael Sandel, also known as the Public Philosopher. Don't just listen to him (or read his words), but pay attention to how re-assembles questions before he attempts an answer.

So, philosophers please step forward. Your country needs you... to help us think.